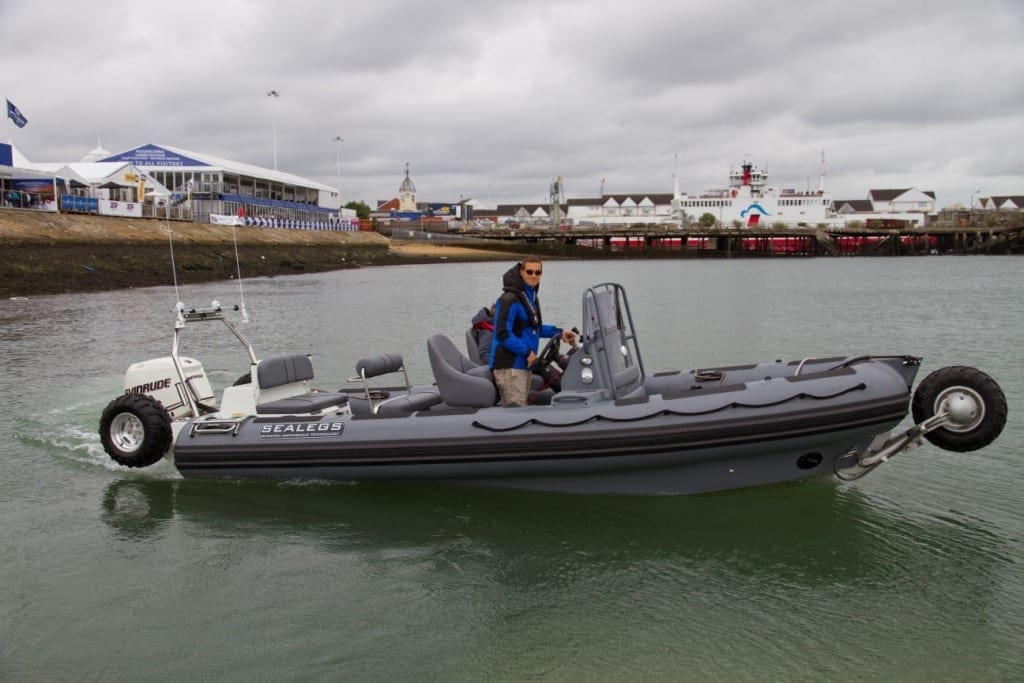 Known for his remarkable survival and outdoor adventures, the British Chief Scout Bear Grylls opted for a slick entrance to the 45th PSP Southampton Boat Show by arriving in his own amphibious SEALEGS RIB.

Salterns Brokerage, the sole UK importer and distributor of this extraordinary New Zealand built rib are exhibiting two new boats from the range of recreational and commercial vessels.

This adrenaline addict cruised in almost undetected as he visited the Salterns waterside berths M001 & M002 on the first weekend of the show.  However, it didn’t take long for the crowd to gather who were thrilled to see this TV hero appear in his new boat, having taken delivery only a few weeks ago; the perfect acquisition for a man who owns his own island off the North Wales coast.

With the push of a button the revolutionary Sealegs Amphibious Craft can be transformed from an all-terrain vehicle into a high speed boat, without compromising on water performance.  On the water the vessel reaches speeds of up to 40 knots and on land can reach 10mph.

Brokerage Manager, Russell Hayden said “Bear absolutely loves the boat and it’s the ideal solution to his requirements.”  These craft have grown at a phenomenal rate with an impressive global coverage. With proven technology and its numerous benefits it has lent itself to military and rescue response applications. “With Bear’s background it was easy to see why this was Bear’s craft of choice” added Russell.

To hear the inspiring story about Sealegs come and meet the man who developed it.  Co-founder, David McKee Wright will be on the stand from Monday to Friday.  Sealegs is a phenomenon and is now an important global recreational and commercial craft.  More commercial/rescue applications are being recognised for its technology.

For further information about this incredible craft, please contact Salterns Brokerage on +44 (0)1202 707222